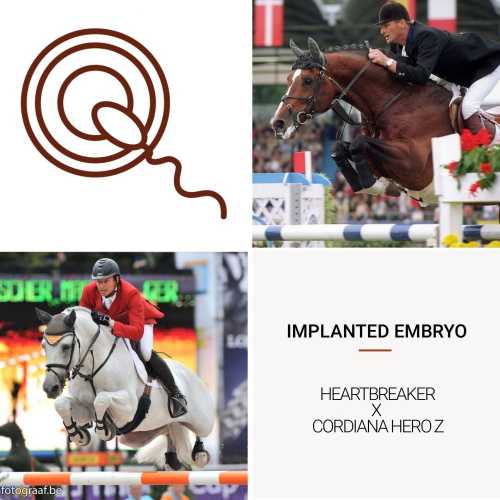 And there is more, a very special mother line is linked because to these masters. The great-grandmother of this Cordiana Hero is none other than the now legendary Usha van 't Roosakker.

Very recently, the equestrian world said goodbye to a very special stallion. Heartbreaker always stood out with his jumping ability, reflexes, attitude and carefulness. He passed these qualities on to his offspring to a great extent and also in the sport they did him no harm. With Peter Geerink he had a very successful career, with a 4th place in the Grand Prix of Aachen as a highlight.

Also his breeding career has many highlights. Offspring such as Romanov, Action-Breaker, Halifax van 't Kluizebos, Toulon, etc. all jumped to places of honor or victories during the most legendary competitions of the world. Meanwhile, he is also a very influential grandfather. Grandchildren Hello Sanctos and Asmara belonged for a long time to the very best in the world.

Cornet Obolensky was born from the magical combination of Clinton and the Heartbreaker mare Rabanna van 't Costersveld. Via Heinrich Ramsbrock the by now Westphalian approved Cornet Obolensky came to the Ukrainian breeder Valentyn Nychyporenko, who kept him for the German breeding and later entrusted him to the German rider Marco Kutcher. Marco and Cornet had a very successful sporting career, but within breeding the stallion caused a real revolution. His first year as a breeding stallion brought among others Cristallo I (1m60 with Henrik von Eckermann), Cornado NRW (1m60 with Marcus Ehning), Conte Bellini (1m60 with Kristaps Neretieks), Cornet d'Amour (1m60 with Daniel Deusser), Cornet's Cristallo (1m60 with Marco Kutcher) and Cocoshynsky (1m60 with Emanuele Gaudiano). Later, Comme Il Faut, Clooney, Balou de Reventon OS and Corbinian followed. Currently 200 descendants jump at 1m45 level and no less than 121 descendants at 1m55 level and higher. On the age of 7 years 25% of the offspring of Cornet's first year already jumped at class S.

The success of Cornet Obolensky's offspring is unprecedented. The whole line is popular at selections and auctions, but continues to confirm itself especially in the sport.

Living legend Diamant de Semilly is a top sire pur sang. He achieved countless victories and places of honor with Erik Levallois in the saddle and podium places at the European Championships and was a stronghold of the French Team. His sporting achievements alone are impressive, but his breeding successes are second to none. The balance, suppleness, power and good canter he passes on to his offspring are a recipe for success. For years he has dominated the sporting scene as a sire figure and the number of approved sons is impossible to keep up with.