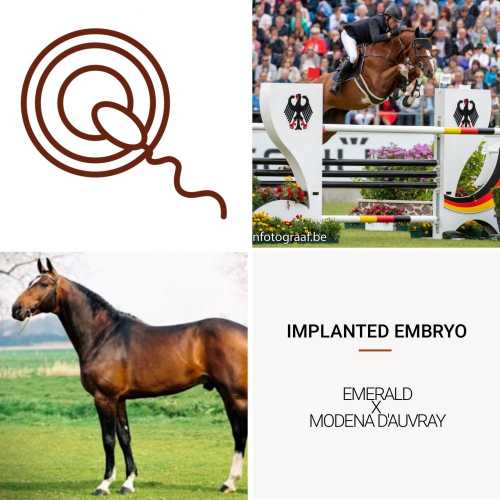 Emerald van het Ruytershof, the son of Diamant de Semilly and Carthina Z, hardly needs any introduction, but we still like to put some of his sport performances in the spotlight:

Modena D'auvrey is a granddaughter of Nikita, a mare that has meant a lot for BWP breeding. Nikita is the mother of three 1m60 horses, a 1m50 horse, four 1m40 horses and 3 approved stallions. Among them are just anyone: Toulon and Vancouver d'Auvrey, respectively BWP ambassador and elite stallion. Toulon was the best-known stallion of the stallion selection as a 3-year-old and then ended up in the hands of Luc Tilleman. He was trained under the saddle of Wilm Vermeir, after which Hubert Bourdy took over the reins and continued to build on Toulon's fantastic record: a first place during the GCT of Sao Paulo, second in the GP of Spruce Meadows (Calgary) and also second in the Nations Cup of Rome. He also finished fourth in the GCT of Valkenswaard, fifth in the GCT of Arezzo and ninth in the GCT of Cannes.

Offspring such as Bernadien van Westuur (Jillian Terceira), Athena (Charlie Jayne), Dadjak ter Puttenen (Omer Karaevli), Edesa's Banjan (Geir Gulliksen), etc. all followed in their sire’s footsteps. Also the full brother of Toulon, Vancouver d'Auvrey, had nice successes under 3 riders: first with Danielle for the USA, then with Bernardo Alves and finally Rodrigo Pessoa took place in the saddle. His international successes include placements and victories at CHIO Aachen, GCTs of Estoril, Chantilly, Monaco and Valkenswaard, the World Cup series in Europe and the USA and the 2010 World Equestrian Games in Kentucky.

Toulon and Vancouver have a full sister, Quinta, who is not only dam of Modena D'auvrey but also of the very meritorious breeding stallion Deauville de la Vie and the 1m45 horses Flobecq de la Vie, The d'Acheronte and Carina Fz.

Modena herself is dam of the 1m60 horse Gaverdi, who finished 4th in the GP at Rockwood, Canada, and picked up tests in Tryon and Calgary. Also another offspring, Cyclade du Barbin, is breaking through at the highest level. Recently she was able to stand in the prize giving of the 4*GP in St.Tropez.

This embryo is not insured! The broodmare still has to be paid to the seller for an amount of 3000 euros, on top of the deposit of 2500 euros. This deposit will be returned to the buyer when the broodmare is returned in good condition to the seller.