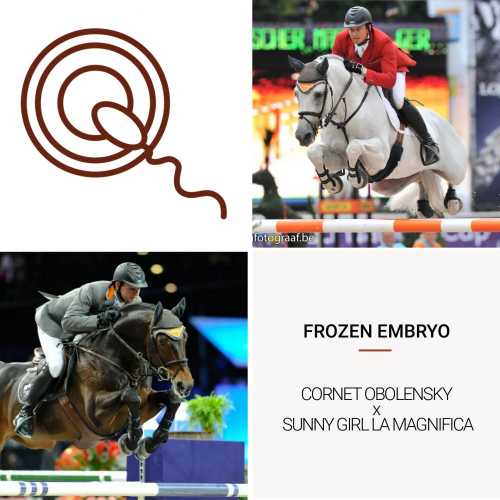 Cornet Obolensky is a result of the magical combination of Clinton and the Heartbreaker mare Rabanna van 't Costersveld. Via Heinrich Ramsbrock the Westphalian approved Cornet Obolensky came to the Ukrainian breeder Valentyn Nychyporenko, who kept him for German breeding and later entrusted him to the German rider Marco Kutcher. Marco and Cornet had a very successful sporting career, but within breeding the stallion caused a real revolution. In his first year of breading, he produced, among others, Cristallo I (1m60 with Henrik von Eckermann), Cornado NRW (1m60 with Marcus Ehning), Conte Bellini (1m60 with Kristaps Neretieks), Cornet d'Amour (1m60 with Daniel Deusser), Cornet's Cristallo (1m60 with Marco Kutcher) and Cocoshynsky (1m60 with Emanuele Gaudiano). Later, Comme Il Faut, Clooney, Balou de Reventon OS and Corbinian followed. Currently 200 of his offspring jump at 1m45 level and no less than 121 of his offspring jump at 1m55 level and higher. On the age of 7, 25% of the offspring of Cornet's first year already jumped at class S.

The success of Cornet Obolensky's offspring is unprecedented. The whole line is popular at selections and auctions, but continues to be confirmed especially in the sport.

Stakkato, "Besser geht es nicht". The Spartan son already caught the attention as a young horse. At the Bundeschampionat for 5-year-old horses he was praised for his bascule, finishing and reflexes, and he also stood out for his workability and enormous fighting spirit in the ring. He closed the championship winning with the perfect 10, after which he climbed to the very highest level under Eva Bitter. They won the Deutsche Meisterschaften twice and jumped into the top 10 of a World Cup (final) several times. In 2007 he was proclaimed Stallion of the Year.

The result of this Stakkato combined with the Hauptstutbuch mare and Hanoverian Mare of the Year 2010  Cecile (by Calypso II) out of Holsteiner Stamm 6225, is the mare Sunny Girl la Magnifica. That combination has already proven to be successful several times. After all, Sunny Girl is the full sister of Sundari, Satisfaction FRH, Satisfaction I, Satisfaction II, Argelith Sambuca and Spimex. Sundari jumped successfully under Henrik von Eckkerman and Philipp Weishaupt, with places of honor in the World Cup of Bordeaux, Donaueschingen and Dortmund. Her son Charlie 1701 (by Chaman) recently won the Bundeschampionat for 5-year-old horses.

Even more remarkable are the results of Satisfaction FRH. The stallion achieved victories at CSI5*-W Gothenburg, GP Hannover and the GP in La Coruña. Further podium places followed in the World Cup series in Stuttgart, Paderborn, Aachen and Balve, and he was allowed to stand in the prize giving ceremony of CSIO Rotterdam, 's Hertogenbosch and Hagen, among others. Also in breeding, he has already achieved wonderful results. He is sire of Status, who jumped to wonderful results under Rodrigo Pessoa and participated in the finals at the World Equestrian Games in Caen, just like Sinfonie 168, Skyliner and Stella Levista. Argelith Sambuca and Spimex also jumped to great successes. Sambuca earned places of honor in the Grand Prix's of Münster, Frankfurt , Nördlingen and Pforzheim and Spimex recently jumped to victory in GP Warrstein and a 5th place at the National Championship in Balve with Elisabeth Kruse in the saddle.

Sunny Girl herself is dam of Grace Kelly (by Grey Top, winner of the mare inspection in Verden), Vario by Verdi (sold through the auction in Fences) and Donna Fugata (by Diarado). Both mares will continue to be used for breeding.

Out of the full sister of Sunny Girl, S-Cecile, came in combination the mare Caron (also by Cornet Obolensky), who received nice points in the Zuchtstutenprüfung in Adelheidsdorf.