FROZEN EMBRYO QUICK STAR X CAN DO IT 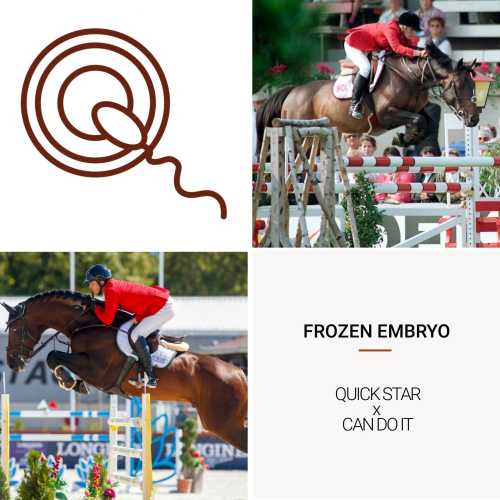 Quick Star, a stallion of modest stature, but with a lion's heart in the ring and excellence in breeding. With Meredith Michaels-Beerbaum and later Nick Skelton, Quick Star enjoyed many successes in the world's most prestigious competitions. In breeding, he is characterized by his unprecedented fighting spirit which he passes on to his offspring to a great extent. Some of them are the currently reigning Olympic champion Big Star (Nick Skelton), Quick Study (Lauren Hough), G&C Quick Star (Pablo Barrios), Big Star (Nick Skelton), Vleut (Maikel van der Vleuten/Edwina Alexander) and Love Affair (Gianni Govoni).

With this embryo, the fighting spirit of Quick Star through the mare Can Do It is combined with the performance spirit of Chacco Blue.

Chacco Blue is one of the leading stallions of recent years. As a young stallion, he was the best performing stallion in jumping and achieved second place in the overall ranking during the performance test in Neustadt/Dosse. Although he had limited breeding in his first year as a breeding stallion, the performance of his oldest offspring stood out and he became an extremely popular stallion with breeders. Chacco-Blue has been ranked first in the World Breeding Federation for Sport Horses' ranking of jumping stallions since 2017.

No fewer than 90 of his descendants have won more than €50,000, with Explosion W being the biggest earner with a total win sum of €2,400,400. They are followed by Blue Movie and Chalou OS. Both Explosion W with Ben Maher and Emanuele Gaudiano's Chalou will defend their country's colors at the Tokyo Olympics.

Under Alois Pollmann-Schweckhorst and Andreas Kreuzer, Chacco Blue himself jumped to a total win sum of €121,315, with places of honor in the World Cups of Mechelen, London, Aachen, and so on.

The grandmother of Can Do It is the Cassini I-mare Notre Dame II. During her sporting career she has booked several successes at 1m45 level, including an 8th place in the CSI3* Grand Prix of Palermo.

In breeding, she produced the KWPN-approved stallion Vingino. Vingino was successful with Abdel Said during CSIO 5 * in Mannheim, CHIO Rotterdam, Riders Tour in Paderborn and Hagen a. T. W., in Braunschweig, Oldenburg, Neumünster, Lanaken, etc. He is sire of several extraordinary sport horses such as Cavallia (Laura Kraut), Davino (Ben Schröder), HH Gigis Girl (McLain Ward) and D'Arnita (Molly Ashe). In 2017 and 2018, the "promising sires worldwide with offspring up to 12 years of age" award was given.

Through Vingino's half-sister and daughter of Lux Z, Sinessa, we come to Can Do It, as well as the KWPN-approved Biscayo. With Juulia Jyläs Biscayo jumped up to 1m45 level and currently has a successful career in breeding.

Can Do It's son Killiam (by Lord Dix), was recently approved for the SBS.