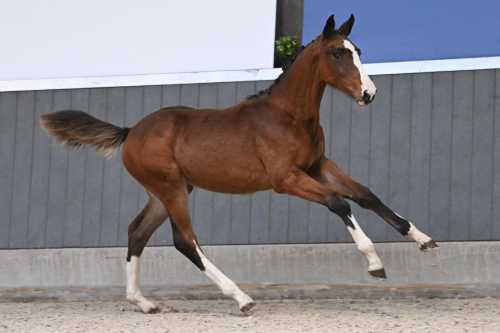 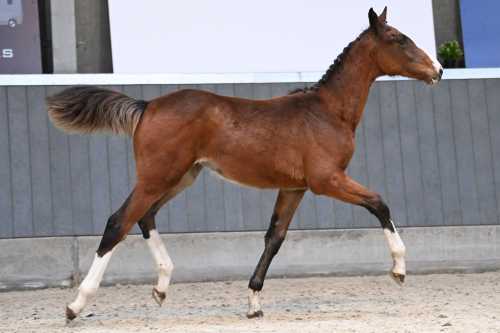 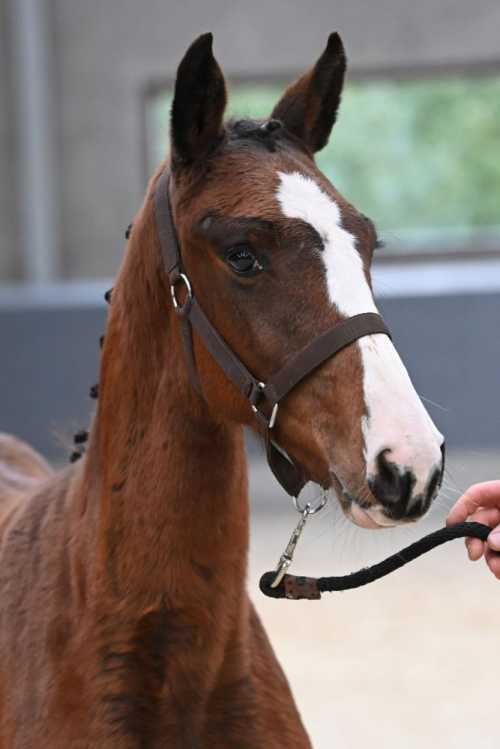 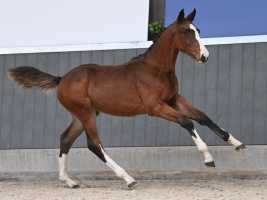 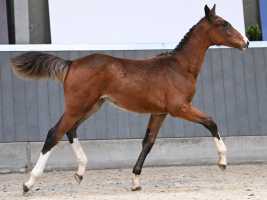 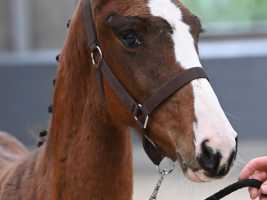 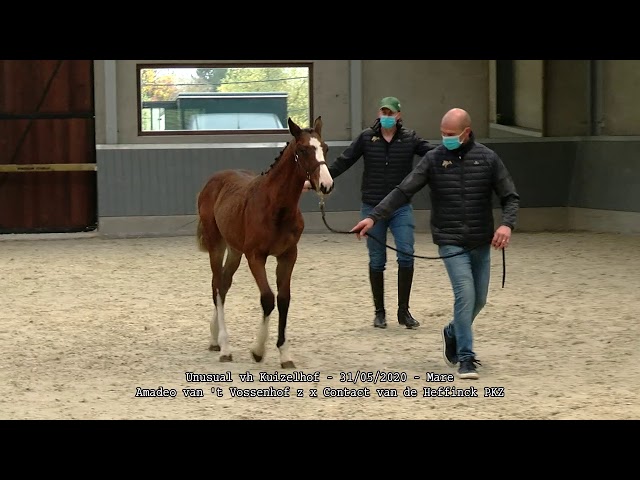 Amadeo already caught a lot of attention as a young horse because of his appearance and scope. As a son of Asca Z (J-A Melchior), who jumps the 1.60 m class, Amadeo van't Vossenhof descends from a very successful pedigree. His mother, Caloma II Z is also the dam of two other very successful horses: Quatro Loma (1.45 m with Hans Dieter Dreher) and Zento Loma (1.45 m with Diego Caselli). Furthermore, she is the full sister of Bessemeinds Caloma, who is performing at the highest levels with Noor Morten Djupvik. Bessemeinds Caloma herself also produced a series of outstanding sport horses, such as the famous Quasimodo Z. This horse is also under the saddle of Morten Djupvik, with exceptional results in the 1.60 m class, such as the Nationscup in Gijon. Apart from that, Quasimodo Z is very successful as a breeding stallion. In the direct dam line we also find Zindiloma (1.55 m), Astrix di Loma (1.50 m), Hangover (1.45 m) and Genetic-Loma (1.45 m). Amadeo's first international successes in 2020 were very promising, so the future looks very bright for this stallion.

Unusual van het Kuizelhof is a descendant of the mare Jannoushka. Jannoushka is a daughter of Contact van de Heffinck and the mare Annouchka van het Breehof (s. Fuego du Prelet), who is at her turn a daughter of the mare Duellpoesie Herlinckhove. Duellpoesie is at the core of BWP dam line 77 and is the dam of Riccardo van de Heffinck. This stallion has already richly proven himself under the saddle of Nadia Steiner.

Annouchka produced 4 foals, of which Heritier van de Waterkant who jumped the 1.40 m level with father and son De Grande. They booked successes at for example the Gold League in Moerzeke and Loenhout. Daughter Lady Dy M (ex. Diana van d’Abdijhoeve) was not only successful in the 2* eventing level, she is also the mother of Hector van d'Abdijhoeve.This iconic grey stallion jumped the highest levels with the young Irishman Bertram Allen.

Another daughter of Duellpoesie is Jennifer van ’t Carelshof.  Jennifer is the dam of the KWPN-approved Investment and Optimum van de Wellingtum, who competes in the 1.60 m courses. Optimum is currently active as a breeding stallion in South-Africa and has already produced some successful foals. Jennifer is also the granddam of Bush van 't Prinsenveld (1.60 m with Koen Vereecke and Lucas Martins Brambilla), Jaegermeister K (1.35 m) and Suprice-K van 't Kattenheye, who jumps the 1.45 m courses under Denis Nielsen. Suprice-K was also the winner of the Youngster Tour in Hagen.

Also Quality van de Heffinck has already produced a successful offspring. She is the dam of Valesca van Breehof, who is at her turn the dam of Copacabana De Amoranda. Both horses have jumped the 1.45 m level under Luiz Felipe De Azevedo Filho. Also Camona 3, who jumps 1.40 m courses, and About You de Amoranda are descendants of Valensca.

Jewel’s Touch (ex. Darlito van den Bosrand) jumped the 1.45 m courses with, among others, Denis Lynch. They were placed 5th at the CSI 5* of Madrid.

Furthermore, Quality is the granddam of Eros van de Broekkant, and third dam of Virgen de Gue. Ruben Lamers has trained Eros van de Broekkant up until the 1.50 m levels, after which the horse proceeded with his career in South America. Virgen de Gue entered the World Championships in Lanaken as a 5- and a 6-year-old and has developed further into the 1.45 m level afterwards.

The first foal of Jannouska, See You by G&F (Cabrio van de Heffinck) was sold by the Belgian Foal Auction of 2018.